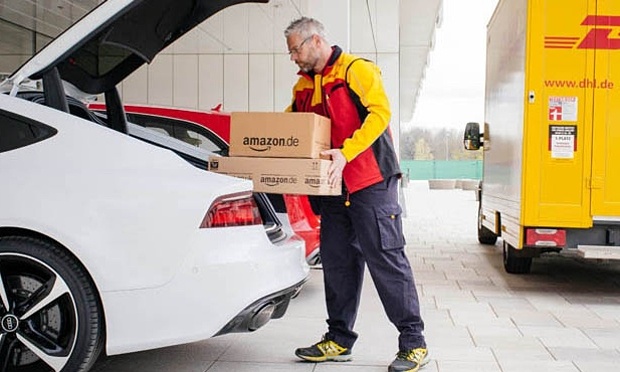 Amazon is testing an addition to its Prime subscription postal service that will see parcels delivered directly to customer’s cars.

The pilot service is a partnership between Amazon, DHL and Audi, and will allow a small group of Prime subscribers in Munich, Germany, to receive deliveries straight to the boots of their cars.

Michael Pasch, Amazon’s director of Prime for Europe, explained that the pilot scheme is an attempt to give customers another option for receiving goods and reduce the number of failed deliveries.

Customers indicate the approximate location of their car when ordering goods. The delivery driver is given temporary keyless access to open the boot of the car only, which is removed when the boot is shut.

The delivery driver tracks and locates the car for a set period covering the delivery window. The cars in the pilot scheme will be specially modified to allow tracking and the one-time keyless entry to the boot.

The pilot will commence in May. Amazon is also working on a system that will allow customers to return goods via the boots of their cars.

The system is similar to Amazon’s lockers, which customers can have parcels delivered to instead of their home or work address and pick up within a week, although potentially more convenient. Audi said that its customer data and privacy were its top priorities, but could not address concerns over potential thefts.

Volvo demonstrated a similar technology delivering food to car boots at Mobile World Congress in Barcelona in 2014, although no commercial service has subsequently been rolled out.