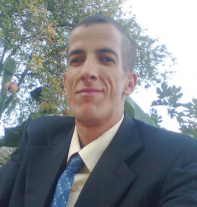 Yazid Merar is from Algeria, with a background in Technologies of Information and Communication for Education and Translation. He is currently working as a trainer at the University of Continuing Education in Technologies of Information and Communication for Education, Bejaia, Algeria. Yazid Merar wants to improve the ICT industry for his Einstein Challenge by devising new approaches to information and communication systems for education. He is an official representative of the International NGO (National Circles of Reflection on Youth, France) and is drawn to youth issues in Algeria and the Maghreb in general. He hopes to propagate and achieve the objectives of the NEF to the 6,000+ members in the organization. He is also a past participant in the NGL e-Learning course (October 2011).

In 2015, Noble was honoured as Young Scientist at the World Economic Forum in Dalian, China. In 2013, he was inaugurated as the youngest fellow of Uganda National Academy of Sciences and the only person to qualify to be in both the young and senior academy in Uganda. Noble is currently the interim president of Uganda Young Academy. Noble was also named a fellow of the Global Young Academy in 2013. In 2007, he won the Cochran Fellowship to do postdoctoral professional studies in the Department of Chemical Engineering at Massachusetts Institute of Technology. Thus far, Noble has supervised eight doctoral theses and 25 masters’ theses. As such, he has authored 78 peer-reviewed scientific papers in reputable international journals with a citation H-Index of 15, i10-Index of 24 and 714 citations as of November 2015. In waste management research, Noble is ranked 35th globally and 2nd in Africa according to Google Scholar rankings.