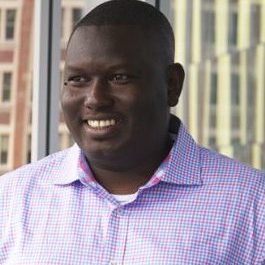 Leveraging Artificial Intelligence and Bioinformatics to develop an economic ecosystem that will help worldwide competitiveness in the different sector including agriculture, health, agrifood, food safety, forest, and ecology.

Abdoulaye was born in Romania where both his parents were PhD students in mathematical fields. Both his parents became university professors. His mom was one of the earliest female PhD holders in Guinea. Abdoulaye was greatly inspired by his parents and received scientific training early on. His dad gave him his first computer at the age of 11 and he wrote his first paper on computer organization in 1992, in the 7th grade. Further, he had a chance to have good teachers in mathematics, physics and chemistry during his secondary school (M. Diané, M. Dieng Sada, M. Sow, M. Diallo, M. Cedy at College Ste Marie de Dixinn and Lycee Mahtar Mbow of Kamsar in Guinea) which gave him the confidence to show his potential in Science. Abdoulaye spent his Saturday’s at Bobo Barry’s office to get training on how to code. Together, they used to write routines to manage data from warehouses.

After high school, Abdoulaye did his Bachelor-Master-PhD in eight years. He obtained a PhD in Computer Science (option bioinformatics) from McGill University in April 2009 supported by a Canadian Natural Science and Engineering Research Council Fellowship. During his PhD, his research focused on conceiving algorithms and bioinformatics method to better understand gene and genome evolution and molecular function. Under the supervision of Prof. Mathieu Blanchette and Vladimir Makarenkov, he developed the first framework for ancestral genome reconstructions. Aboulaye received the Chikio Hayashi Award of the International Federation of Classification Societies (IFCS) in 2006 for his PhD research. This award is given to promising researchers who have started contributing to the domains of classification, data analysis and related areas, and who are in the early stages of their professional careers. He also received the Springer Award for the best presentation in classification at SFC-Cladag in 2008.

After his PhD, he went on to become a postdoctoral scholar in the Computer Science and Artificial Intelligence Laboratory of the Massachusetts Institute of Technology (MIT) under the supervision of Prof Manolis Kellis and Eric Alm. He was also Research Associate of the BroadInstitute of MIT and Harvard.

Today, is a Professor (full professor at the age of 26) and Director of the Bioinformatics Lab at Université du Québec à Montréal (UQAM). He is also a co-founder and Chief Scientist of at My Intelligent Machines (MIMs). MIMs is among the top 10 startups to watch in Montreal according to Betakit. In Africa, he co-leads Acces Omic Senegal with the Institute of Recherche en Santé, Surveillance Épidémiologique et de Formation (IRESSEF) of Senegal. This initiative is building the foundation of precision in health in Senegal.

Currently, Abdoulaye’s research is at the intersection between bioinformatics, artificial intelligence and genomics. He is developing technologies that empower life scientists in the health and agrigenomics sectors to address important questions by providing algorithms and machine learning methods to detect, study and monitor pathogens in epidemiological surveillance, to include genomic precision in livestock production models, and to model and monitor biodiversity in agriculture and forestry. He also provides Artificial Intelligent -powered technologies to help deliver to life science communities an easy-to-use and integrated genomic informed solutions.

Abdoulaye applied for the NEF Fellowship to accelerate his goal of implementing African genomic programs and technologies across the continent that will fit Africa’s diversity and needs. He has received numerous awards. In addition to the awards listed above, Abdoulaye was awarded the early career UQAM Science Professor Excellence Award in 2016. He received the best paper awards at the Machine Learning and DataMining Conference in 2016. His research is funded by the Discovery Grant of the Canadian Natural Science and Engeneering Research Council (NSERC), Quebec Research Fund in Nature and Technology, Genome Quebec, HIVTrust, and the NIH. He has more than 60 publications and more than 30 guest talks in prestigious institution such as MIT, Harvard, Oxford, UCSF, Institut Pasteur de Dakar and others.

He is a member of the International Society of Computational Biology, Association Canadienne en Informatique, Africa Society of Bioinformatics and Computational Biology. He is a member of the RQRM (Regroupement Quebecois de Recherche sur le Médicament) and an Associate Member of Compute Canada. He also founded of wwwAfrica, series of workshop to enhance the web driven technologies in Africa and BAI@IJCAI a series of workshops leveraging bioinformatics and AI.

Aboulaye credits growing success to his family, in particular to the support of his wife, Ramatoulaye Bah, a scientist, Master-PhD student in virology and Immunology raising their two wonderful children.