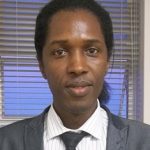 As a key medium- to long-term goal of Mamadou’s research group (the African Microbiome and Epidemiology Research Group (AfriMERG)) over the coming years is the development of early diagnostic tools for altered human microbial profiles associated with specific diseases, and the development of microbial-based therapies (containing a mixture of missing protective microbes) for the prevention or treatment of diseases.

Mamadou was born in Boffa, Guinea. He became interested in fighting infectious diseases because of his medical training in Guinea where he witnessed high mortality rates due to infectious diseases. After his medical studies at the Gamal Abdel Nasser University of Conakry (Guinea), he undertook training in biomedical research, which led to a PhD in Infectious Diseases at Aix-Marseille University, France. He completed a successful PhD research project, with 10 publications on the hepatitis E virus infection. In addition, during his PhD training, He was awarded the “Infectiopôle Sud Scientific Foundation Research Fellowship” as well as the prize for the best poster presentation of the “15th Actualités du Pharo” in Marseille, France.

Currently, Mamadou is a Wellcome Trust Research Fellow and Senior Research Officer at the University of Cape Town and the Director of the newly-established African Microbiome and Epidemiology Research Group (AfriMERG) within the Division of Medical Microbiology
at the University of Cape Town, South Africa. In terms of research interests, Mamadou is currently conducting a prospective longitudinal study on how the composition of the respiratory tract and gastrointestinal microbial communities (microbiota) influences the development of respiratory diseases in African children. His group (AfriMERG) is now at the stage where they have produced large microbiota datasets, associated with very detailed clinical data, which they will analyse for association, predictive value and to better understand respiratory disease pathogenesis.

Prior to joining the University of Cape Town, he worked as a Research Associate in the Department of
Medical Microbiology, Aix-Marseille University, France. Mamadou’s research projects led to better understanding of the risks of transmission of hepatitis E virus (HEV) from animals (pigs and wild boars) to humans. Notably, the result of one of his projects was influential that it led the French authorities to recommend preventive measures against the transmission of HEV
from pigs to humans.

In 2011, he returned to Africa to work as a Carnegie Postdoctoral Research Fellow in the Division of Medical Microbiology at the University of Cape Town. The two-year postdoctoral project aimed at investigating the role of the nasopharyngeal microbial communities (microbiota) in the development of pneumonia in young children within the Drakenstein Child Health Study (DCHS). One of the findings of his work led to updated recommendations on sampling methods from the World Health Organization (WHO) Pneumococcal Carriage Working Group. Later, as part of a Wellcome Trust Training Fellowship grant, Mamadou investigated the role of faecal microbiome in wheezing illness in children within the DCHS.

As part of this fellowship, he published a paper that contributed to the validation of faecal DNA extraction protocols for microbiome profiling. In addition, the pilot data showed that meconium samples are not sterile and their microbiota are distinct from those of the infant faecal microbiota collected later in life, as well as those of their mothers. Primary drivers of infant faecal bacterial profiles were early-life feeding practices and HIV exposure.

Since 2007, Mamadou is a board certified physician by the Guinean Medical Council. In addition, he is currently a member of the African Society for Laboratory Medicine (ASLM), International Society for Infectious Diseases (ISID), African Organisation for Research and Training in Cancer (AORTIC), and African Society of Human Genetics (AfSHG). Mamadou has authored 20 scientific articles and 19 conference papers, and he is an ad-hoc reviewer for eight international peer-reviewed journals.