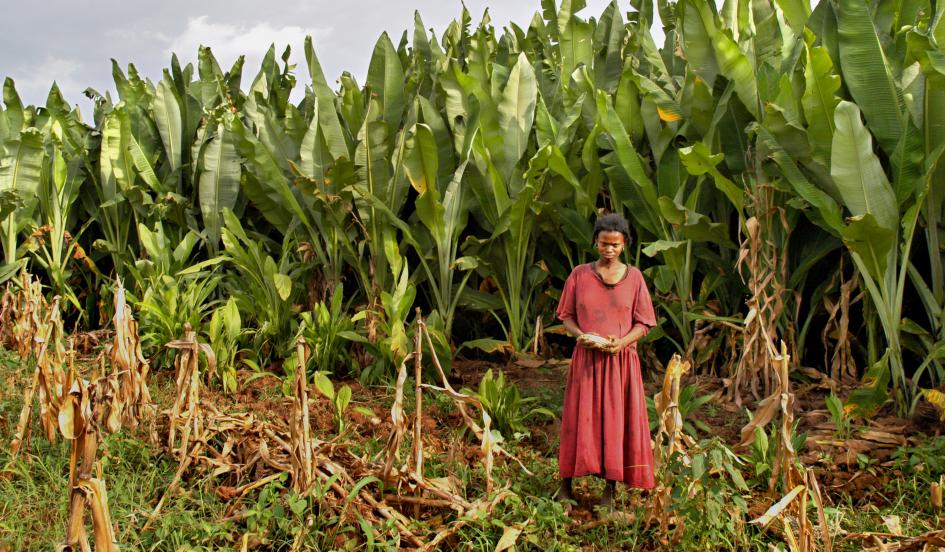 Dibaabish Jaboo kneads the pale, vegetative flesh of the enset plant, like her mother did, like her granddaughters do. When she’s finished, she bundles the plant’s thick, decomposing stalk into its 12-foot-long leaves along with spices and agents to help it ferment for a few weeks. Once it’s ready, she can store the bundle underground, or pound it into flour for bread or porridge.

Here, in southern Ethiopia, enset thrives on farms that could be mistaken for forests—growing among coffee trees, sugar cane, gargantuan squash, corn, yam and other crops—where its long-lasting roots shield the soil from erosion by keeping dirt in place during droughts and floods. Ethiopians have cultivated the perennial plant—a cousin of the banana tree—for thousands of years, converting its stalk, roots and leaves into food, medicine, decoration and more. It has persisted through droughts over centuries, storing water in its bulbous stalk, as camels do in their humps. When a Portuguese priest came to Ethiopia in 1640, he described enset as a “tree against hunger” because of its resilience and long shelf-life as a fermented food during famines. Even when other crops fail, enset often remains.

Tadesse Kippie, an agroecologist at Dilla University, and I eat the decomposed plant, baked into a round, dense bread called kocho, and served with flavorful tidbits of beef. Kippie grew up with enset—“After mother’s milk, enset was my first food,” he recalls—and is one of many enset enthusiasts in Ethiopia, where it is experiencing something of a revival among agroecologists. They’ve explored the nutritional content of its fermented products, and shown, for example, that pregnant women with enset-based diets have higher levels ofvitamin B-12 and zinc, which protect against some pregnancy complications, as opposed to women who ate corn as a staple instead. They point out that enset can be safely stored without refrigeration for a year or more, and that coffee trees fare better when grown in the shade of the plant’s leaves.

Jaboo, center, and her granddaughters tend to the plants.

Subsistence farmers like Jaboo know from generations of experience to plant enset alongside a diverse range of crops that provide different nutrients, and that can occasionally be sold at the market. And they’ve noticed that the soil is richer with enset or legumes mixed in. Most importantly, this crop diversity lessens their risk of starvation because if one crop fails, they have another to lean on. They have little room for error because most subsistence farmers in Africa do not have extra money with which to buy food. If they don’t grow it, they oftendon’t eat it.

For all of the merits of sturdy, indigenous crops like enset—and small, diverse farms in general—they are unlikely to raise subsistence farmers out of poverty, which fosters a slew of problems. “Enset is great if a farmer is relying on [their] own production for food, but ultimately you want people to grow their incomes, which means they need to produce something they can sell,” says Paul Dorosh, of the International Food Policy Research Institute, a think tank in Washington, D.C., that focuses on solutions for hunger and poverty. “A future that involves day-to-day survival on your one hectare plot is not promising.”

What’s more, tough times lie ahead for small farmers in sub-Saharan Africa: Climatologists predict that droughts and floods will grow more frequent and severe, especially in tropical and sub-tropical nations. That’s dire news for 80 percent of farmers in sub-Saharan Africa, who depend on farms no bigger than a couple of hectares (about the size of two baseball diamonds), and who live on less than $2 per day. If climate change continues unabated, and population growth rates remain the same, 355 million people are predicted to be undernourished in sub-Saharan Africa by 2050.