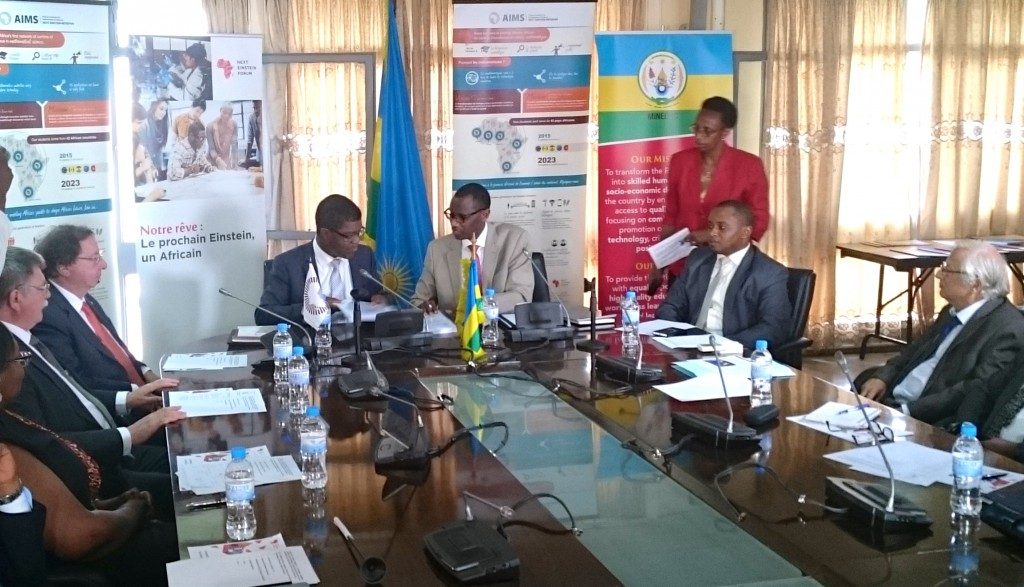 2 February – After the signing of a partnership agreement between the Government of Rwanda, the Next Einstein Forum (NEF) will make its home in Kigali, Rwanda starting late 2016.

In addition, the partnership provides the framework for the establishment of an AIMS Centre of Excellence in Mathematical Sciences as well as a cutting-edge Quantum research centre, a first for Africa.

The benefits of the agreement were explained by Rwanda’s Minister of Education Papias Malimba Musafiri, “I greatly welcome this important partnership with AIMS-NEI as this will greatly enhance Rwanda’s ambitions to strengthen the capacity in science mathematics and engineering in support of Rwanda’s and the region’s development.”

The agreement will establish the global headquarters of the Next Einstein Forum (NEF) in Rwanda and bolster President Kagame’s efforts in hosting the biennial NEF Global Gathering in 2018. Preparations are underway for the inaugural Global Gathering slated to take place from March 8 to 10, 2016 in Dakar, Senegal, where President Macky Sall will pass the baton to President Kagame.

NEF Managing Director Arun Sharma said, “As we finalize our preparations to host the world in Dakar at the NEF Global Gathering 2016, we are thrilled to have Rwanda as an institutional partner and soon the home of the NEF Secretariat.  This is a great step forward for the NEF and for science in Africa on the global stage.”

The Government of Rwanda will join NEF’s growing list of institutional partners and supporters, including the African Union Commission as well as the United Nations Educational, Scientific and Cultural Organization (UNESCO), the Governments of Senegal and South Africa, the African Academy of Sciences (AAS), Robert Bosch Stiftung, Johnson & Johnson, Carnegie Corporation of New York, MasterCard Foundation, IBM and a growing number of private sector partners from across the world who are passionate about positioning Africa’s scientific community as an influential member in the global scientific community.